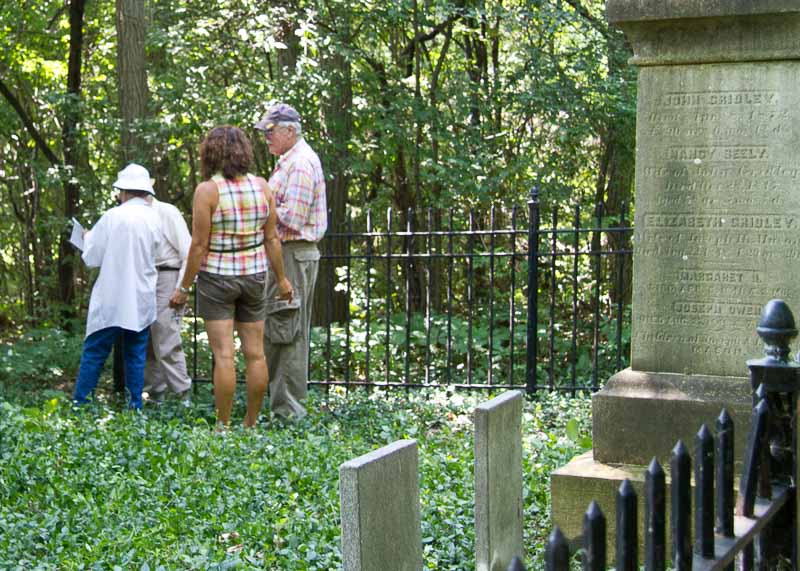 Braving weeds and hungry mosquitoes, Historical Society members made a trip to the hidden Gridley Pioneer Cemetery in July of 2010.

A school, a cemetery, a ball field, a restaurant…these are just a few of the things in Long Grove that have used the name Gridley. It all started back in 1835 when John and Nancy Gridley and their six children (Elisha, George, John T., Elizabeth, Mary Ann, and Louisa) boarded a steamer, then a canal boat, and finally a wagon to make their way to where Long Grove is today. Why move into the wilderness from their “civilized” home in New York? John had a leather tanning business out East, but due to the poor economy in the mid 1830’s thought he would try his hand at farming. So the Gridley family went to where good land was available–Illinois. John and his sons built a home from logs and began laying out roads. Hard to imagine Long Grove without any roads, let alone traffic, isn’t it? The Gridley School was built in 1838 and was the first in the area. Two of the school teachers eventually married into the family as brides to sons Elisha and George. Nancy and a few other women who had moved into the area started the first church (also a log structure) in Lake County, what is now known as Ivanhoe Church.

Sons George and John tried their luck in the Gold Rush of 1849 and relocated to California. When things didn’t “pan out” as they had hoped, the men returned to Long Grove. Son Elisha built a dramatic mansion near the intersection of Oakwood Road and Rt. 83 called Endwood. This was later turned into a resort called Oakwood at the turn of the century. The mansion no longer exists, as it was demolished in the 1940’s. Many of the pioneering family members are buried in the Gridley Cemetery, which is maintained by the Long Grove Historical Society.

Thanks to my friends in the Historical Society for helping me research and fact-check this. Our local group survives on donations and volunteers and is a great resource for those wanting to know more about our Long Grove history. Check them out at longgrovehistory.org.