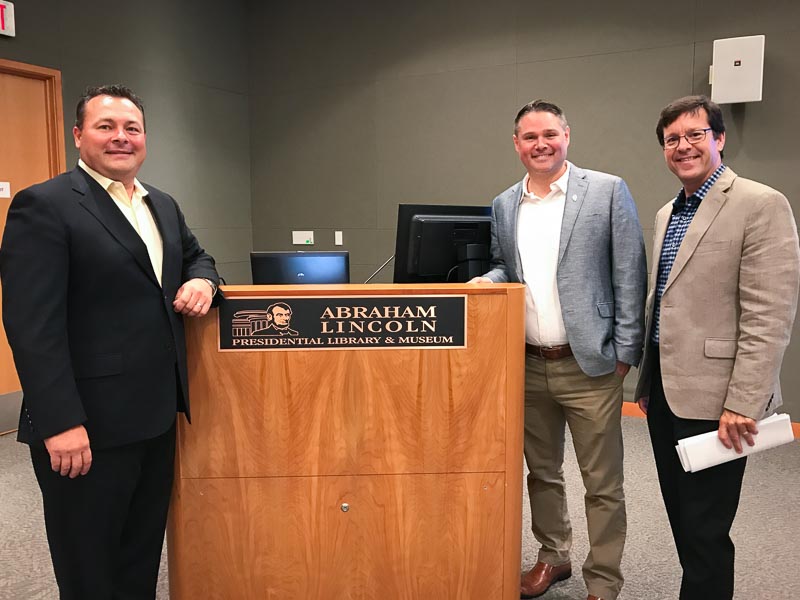 It was a victory in Springfield today for Long Grove! The esteemed historians and archaeologists who make up the Illinois Historic Sites Advisory Council just dumped a big bucket of awesome sauce on our covered bridge by voting unanimously to recommend it to the National Register of Historic Places. Aaron Underwood, Past President of the Long Grove Historical Society, was instrumental in preparing the 35 page application, and spoke on the merits of this landmark before the board at the Abraham Lincoln Presidential Library in Springfield. The bridge, which dates from 1906, qualified because of the steel “pony truss” construction unique to that time period, as well as the original and ornate pedestrian walkway, which is still intact. The nostalgic cover was added in 1972, and according to the experts at the meeting today, might be eligible in five years for historic status on this feature as well. The next step in the process is approval by the National Park Service, which administers the National Register.

It was a thrill and an honor to be in Springfield today to witness our beloved bridge advance one giant step further towards this respected status. The Village has tried several times over the years to achieve this recognition, most recently in 2014, while I was Village President. But just like the “little engine that could,” we kept on trying, and finally with enough persistence, diligence, research and hard work, it looks like we might just be able to achieve the goal this time. Our application now moves on to Washington and in about six to eight weeks we expect to hear back with the news of final placement on the national list. We think we can, we think we can do it! Continue to keep your fingers crossed.

Here’s the Daily Herald article that appeared online on June 30: 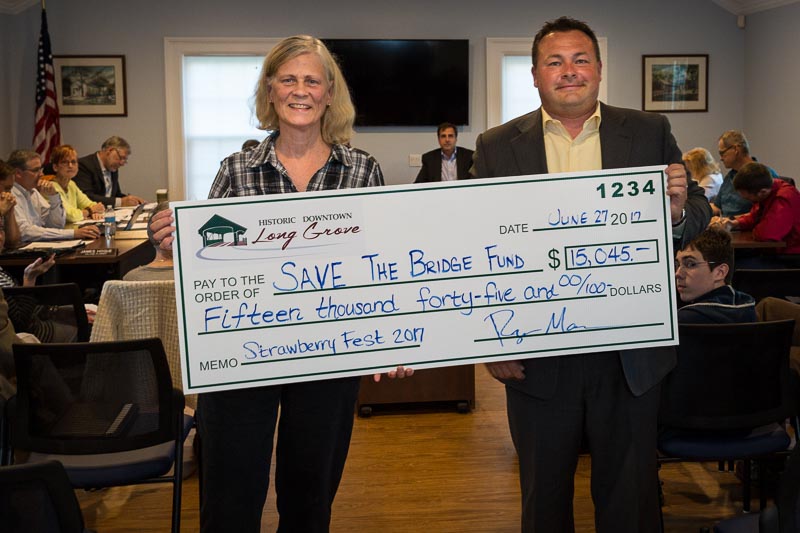 Last weekend’s Strawberry Fest featured lovely weather and a healthy attendance. The Historic Downtown Long Grove Business Association generously pledged to donate a portion of the admission fees to help offset the costs of needed restoration for our Historic Covered Bridge. The happy result is pictured above, as Ryan Messner, President of the HDLGBA presents a giant check to Diane Trickey, Treasurer of the Long Grove Historical Society, during the June 27th Village Board meeting. It is exciting to see donations such as these–earmarked for covered bridge restoration–start to accumulate, and this is only the beginning. Stay tuned as efforts continue over the summer and into the fall as the residents, merchants, Historical Society, and other community groups work together in raising funds to “Save the Bridge.” 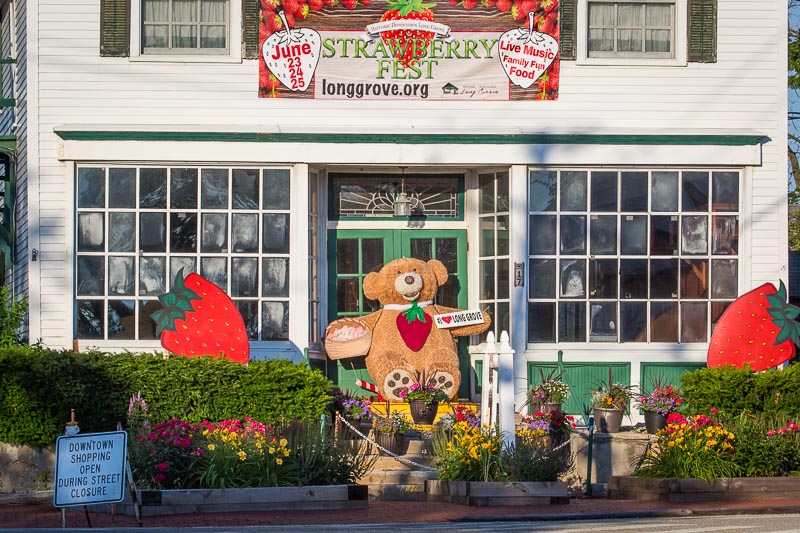 The energy in Long Grove today is electric–so much enthusiasm for the weekend ahead! Not only is Strawberry Fest returning, but the weather forecast is summertime terrific. If you are looking for a fun, family event this weekend, look no further than Long Grove. Bands “7th Heaven,” “Hi Infidelity” and “The Gingers” are scheduled to perform, among others. The Kids Zone on Towner Green will be in full swing featuring the “Bubble Man” and knights from Medieval Times. The Archer parking lot will be rocking and rolling with carnival rides for the young and young at heart, and don’t forget the chocolate covered strawberries from the Long Grove Confectionery–an annual treat!

Something new this year is that the merchants have generously decided to donate 20% of the profits from the admission fees ($5 per person per day, 12 and under free) to the fund to restore and renovate our historic covered bridge. There are so many good reasons to come have fun in Long Grove this weekend! 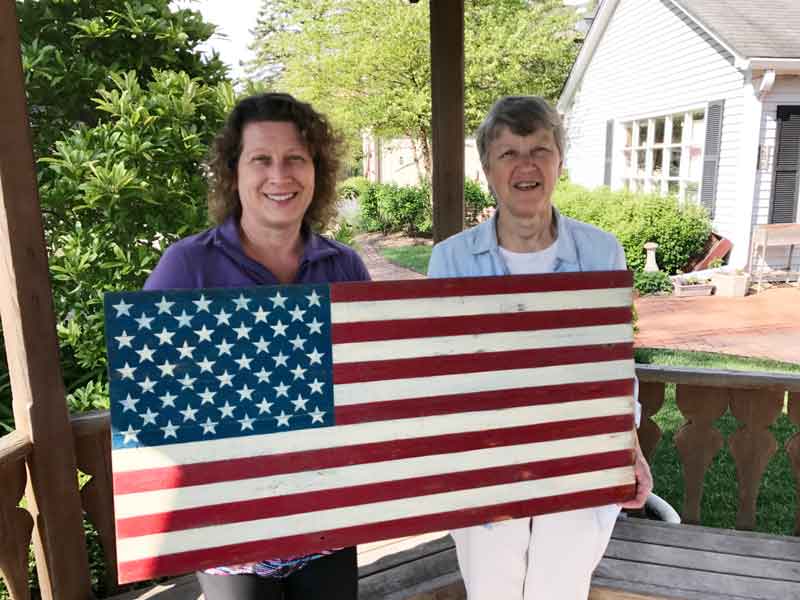 Posing with Long Grove artist Marie Roth and the awesome patriotic gift that she created for me.

June 14th is flag day, but only one state–Pennsylvania–observes the occasion as a legal holiday. Another interesting bit of trivia that I recently ran across stated that Betsy Ross didn’t receive credit during her lifetime for sewing the first American flag in 1776. So to honor Old Glory and the talented women who create her (past and present), I am highlighting the story of a fantastic gift I recently received.

To thank me for my service as Village President, Long Grove artist and friend Marie Roth presented me with the beautiful painted wooden flag pictured above. Marie has been creating wooden renditions of the red, white and blue for many years now, and has quite a following. She was even recently featured in a national magazine! Marie’s flags are usually made out of reclaimed barn wood, and she is often on the lookout for old farm sites and other possible sources of wood with an interesting history. When she completes a flag Marie always includes a write-up about where the barn wood was found, and any stories she knows about the former owners.

What makes my flag so special is that it did not come from reclaimed barn wood, but instead, from wood that was once part of our Long Grove covered bridge! During my term of elected office the covered bridge has been hit and damaged many times (too many times!) by trucks and distracted drivers. During one of the many repairs, a pile of discarded and damaged boards was left by the side of the road and after several days Marie was alerted to the find. I have often coveted Marie’s flags, and even purchased a couple for gifts over the years. Now I am delighted to have a piece of Marie’s art and a piece of the covered bridge hanging in my home to remind me of the years spent representing our Village.

Speaking of the covered bridge, we are getting ever closer to having our local landmark on the National Register of Historic Places. I will be attending a meeting in Springfield later this month of the Illinois Historic Preservation Agency, who will be reviewing our application and (hopefully) making a recommendation to the National Park Service for the official designation. Keep your fingers crossed! 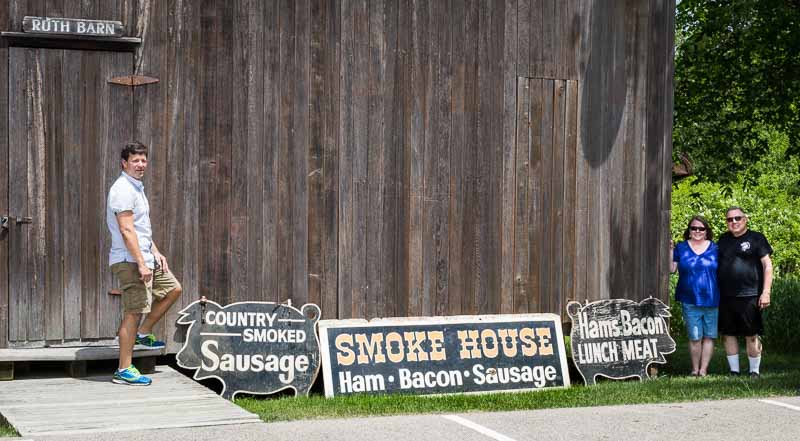 The Long Grove Historical Society’s 1840 Ruth Barn will be the new home for the iconic signs from the Country Smokehouse.

Longtime residents in the area remember fondly the combination smokehouse-restaurant-general store that was located on Rt. 83 and Gilmer Road in Long Grove, called the Country Smokehouse. Closed since 1999, the popular spot featured old-fashioned meats smoked in the historic smokehouse on the property (which is still standing), a deli, and a seven table restaurant serving up country breakfasts and hearty lunches daily. Owner of the business, Bernice Ann Tiffany, has passed away, and her daughter Jane recently contacted me to see if the Historical Society would like some donations of pictures, documents, and other antique items from the Smokehouse and Ferry Farms, the dairy farm and creamery that originally stood on the property. We were very excited to receive these items and happily welcomed the “pigs” back home today to live in our 1840 Historic Ruth Barn! We will be able to incorporate the signs into our field trip program for the local 3rd Graders when they visit to spend the day in our one-room schoolhouse and learn about local history and life in the pioneer and early farming days.

Ferry Farms was the home of Ferryhill Dairy in the 1930’s, and the Country Smokehouse was part of the original estate. It featured an original tin ceiling and shelving that dated back more than 50 years, chock-full of grocery items much like an old-time general store. Many of Bernice Tiffany’s regular customers shared their pig-collecting mania with her, resulting in hundreds of cute pink porkers on display in the restaurant along with the old-time memorabilia. We are grateful to Jane and Ken for saving many of these ties to the past, and for sharing them now with the Long Grove community. 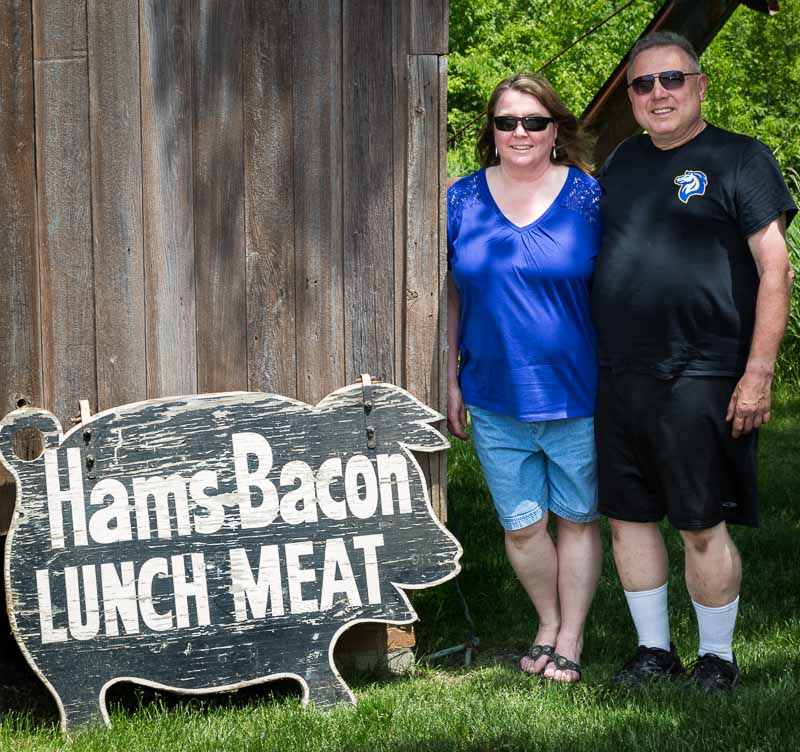 Jane Tiffany-Hansen and Ken Hansen of Grayslake, who graciously donated items from the Smokehouse and Ferry Farms to our Historical Society.