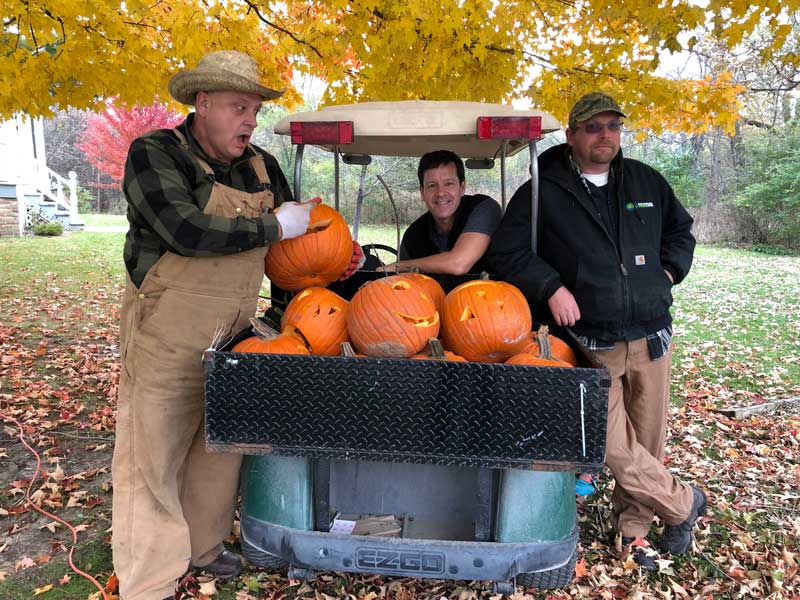 John Kopecky, Aaron Underwood and Jessie Visocnik (L to R) doing some pre-haunting of the Historical Society lawn for “A Scary Night at the Farmhouse.”

This past Friday, October 26th, things were feeling very “Halloweenish” in downtown Long Grove. Merchants hosted kids in costumes for trick-or-treating in the late afternoon, and the streets were alive with mini ghouls and ghosts sprinkled amidst the princesses and superheroes. I happened to be taking a dance lesson at Fred Astaire during this time, and it was a delight to see so many young families stopping in for candy. And hats off to the enthusiastic Dad who dressed as a purple and rainbow accessorized unicorn! 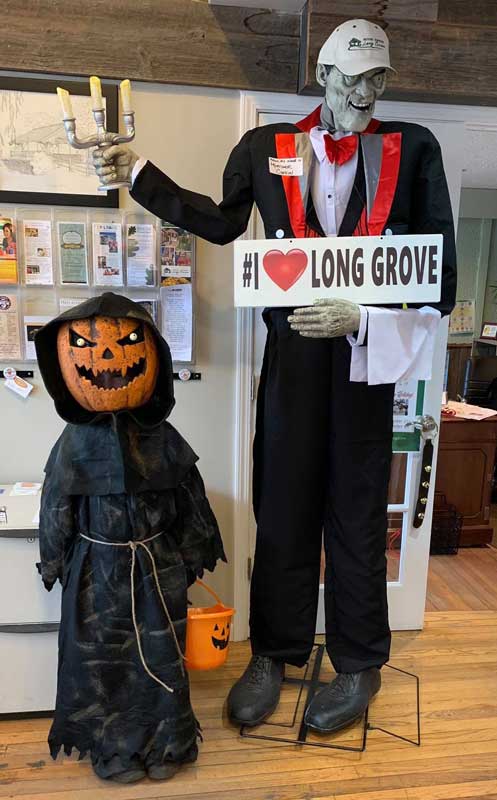 A scary but cute trick-or-treater is greeted at the Long Grove Visitor’s Center by our official Halloween host, Mortimer Coffin.

Later in the evening, the Historical Society Farmhouse became haunted with singing witches and warlocks, under the direction of crypt-keeper for the evening, Mike Dvorak. Families enjoyed relaxing on the patio with fire pits for warmth and spooky atmosphere. The Ghost of Cuba Road was even spotted in the back yard among the treeline, forever searching for directions. My personal favorite musical number of the evening was a custom version of “Werewolves of Long Grove.” 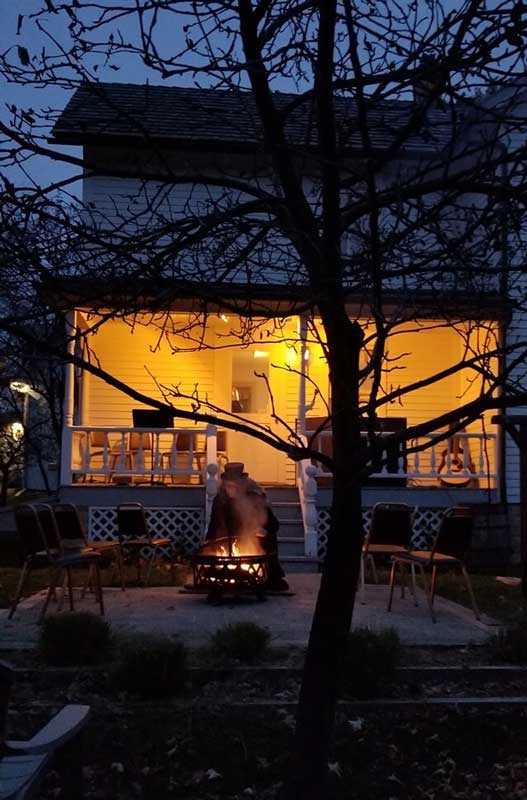 Setting the scene for scary songs and stories!

Another sighting of the Ghost occurred at Buffalo Creek Brewing following the show. Apparently, all that haunting works up a powerful appetite! 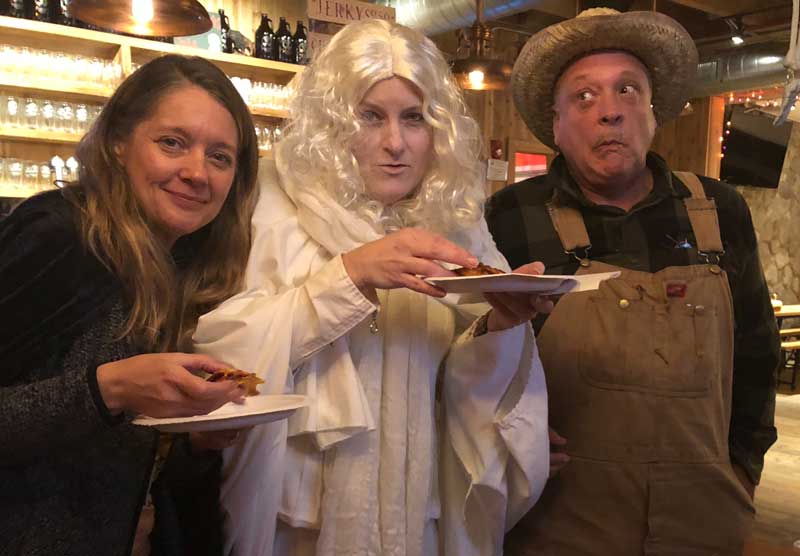 No place in Long Grove was safe, as Frankenstein was even spotted at the Dance Studio, menacing the local villagers. 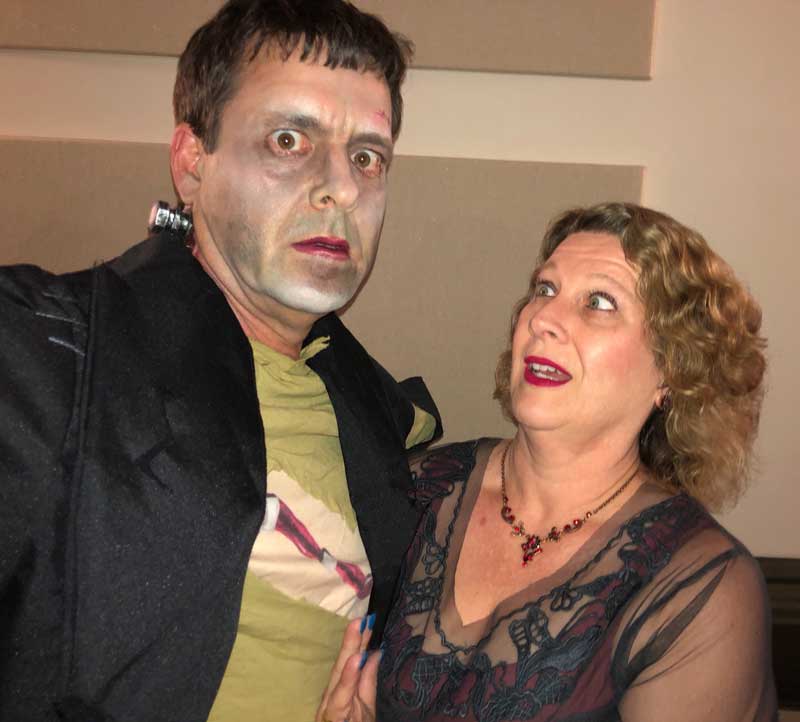 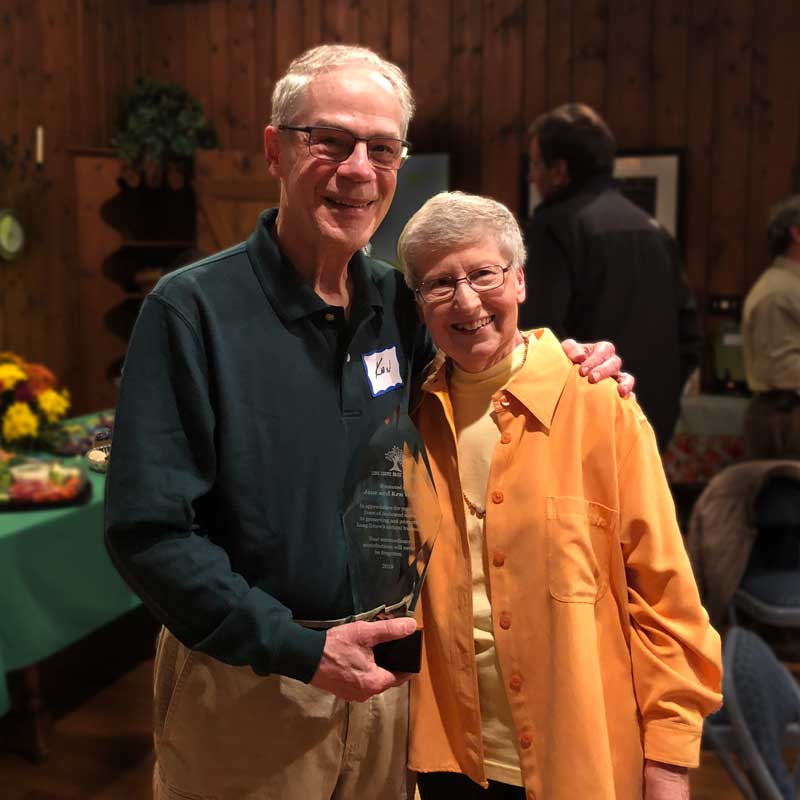 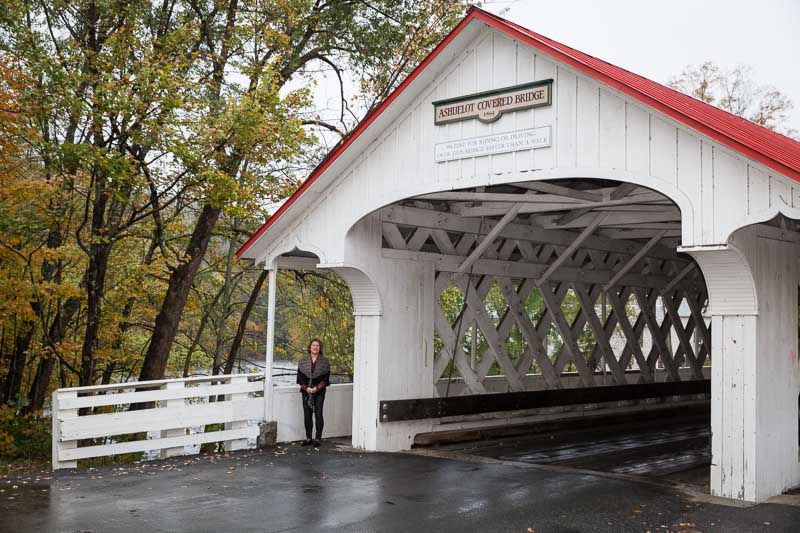 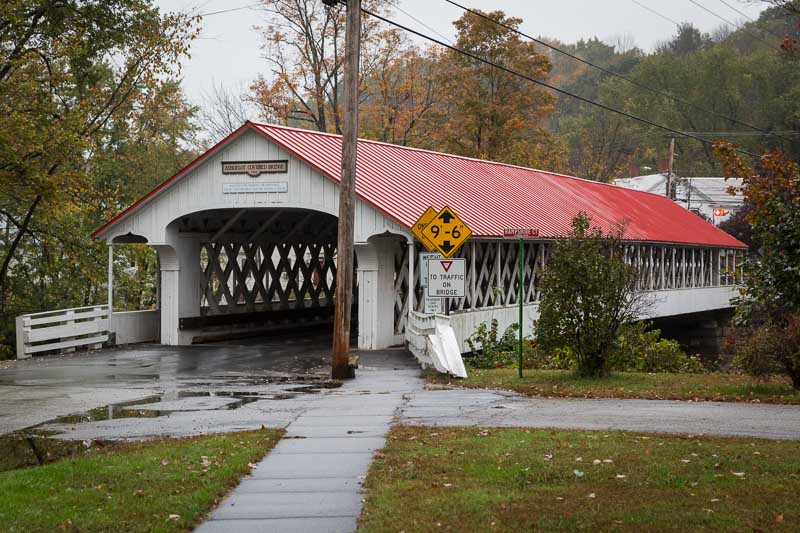 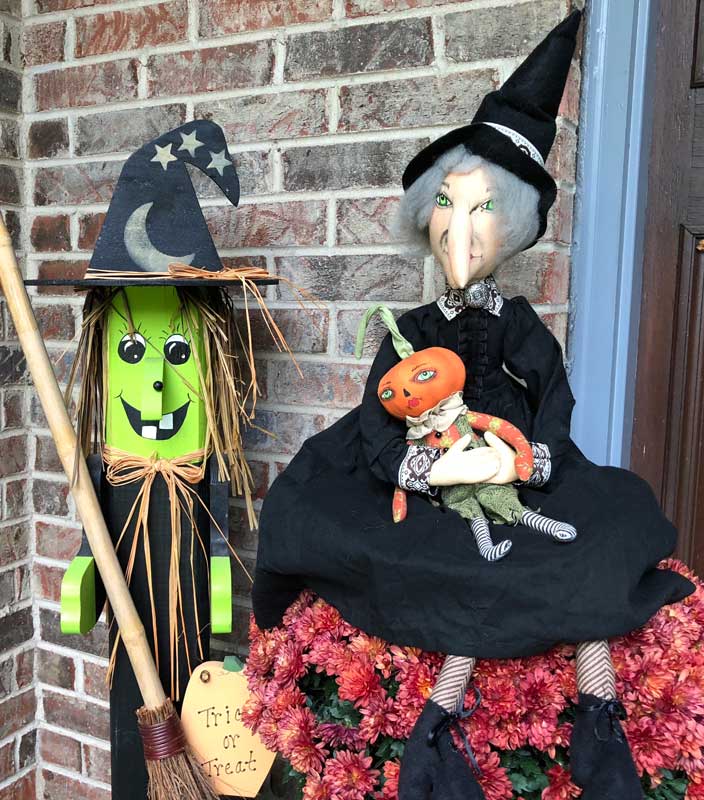 Now that Fall is in full swing and Halloween is fast approaching, downtown Long Grove has several special events planned to help get you in the holiday “spirit.” My favorite fun and creative new idea this year is Witches Night Out, being held next Thursday evening, October 18th from 5 to 8 pm. Stores in the historic downtown will be staying open late and the restaurants in town will be offering special themed menu items to taste and sip. Wear your favorite pointy hat and you might even have an opportunity to bedazzle it! I have also heard tales that fortune tellers, tarot card readers, and even an enchanted D.J. may be conjured up to add to the evening’s excitement. The spell has been cast–don’t miss this girls and ghouls gathering!

Other Spooktacular Downtown Long Grove Events in the next few weeks include:

Scarecrow Day:  Saturday, October 13th from 11-4 outside Country House on Robert Parker Coffin Road. Bring your own clothes and props and for a $5 donation you will receive the supplies and help to create an original scarecrow masterpiece.

Trick or Treating:  Friday, October 26th from 2-5. Dress your little ones in costume and trick or treat at the downtown Long Grove stores and businesses. Parents can register for a prize drawing at the Information Center.

A Scary Night at the Farmhouse:  Friday, October 26th from 7-7:45 pm at the Historical Society Farmhouse. Enjoy a family friendly Halloween themed variety show and sing-a-long outdoors on the back porch patio. Fire pits will provide some warmth and be sure to bring your folding chairs. Spooky stories and songs to delight all ages.

Halloween Pet Parade:  Sunday, October 28th from 12-4:30. Dress your furry friend in their most adorable costume–prizes will be awarded! 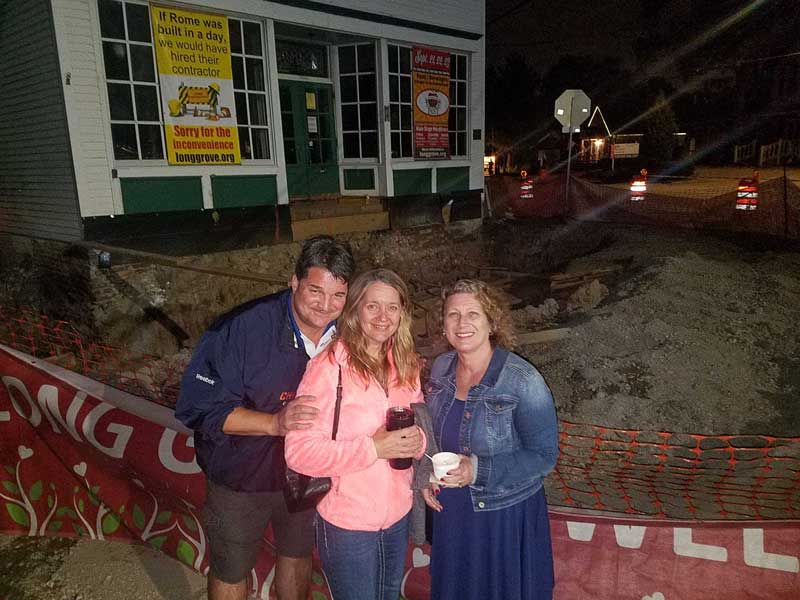 Long Grove residents Dave and Amy Gayton (on the left) join me in checking out the giant excavation at the crossroads in Long Grove during Apple Fest 2018.

Anyone who has dared to venture into the Long Grove historic downtown in the past several weeks can tell you that it’s been a challenge navigating around all the various construction obstacles. Storm sewers are being installed, pavement dug out, building foundations reinforced, utilities relocated, roads temporarily closed–you name it–everything is converging into one giant mess of inconvenience. While there has been a fair amount of road work going on since April of this year, crews have recently ramped up the pace in an effort to complete as much as possible before winter sets in and puts an end to the road paving season. The Old McHenry Road reconstruction and intersection improvements project is being undertaken by Lake County DOT. Starting this coming Tuesday, October 9th, at 6 a.m. a portion of Old McHenry Road will be closed to all through traffic with reopening anticipated in November. Click here for more details and to view a map of the detour.

All stores in downtown Long Grove have remained open during the construction, but as you can imagine, with torn up streets and sidewalks it has made getting from place to place an adventure. Shopkeepers that I spoke to this week are drawing on reserves of patience and optimism, and looking forward to brighter days ahead with freshly paved roads and sidewalks, new lighting and streetscaping, and a refreshed look to our historic crossroads. One big change on the horizon is the traffic signal soon to be installed on the corner of Old McHenry Road and Robert Parker Coffin Road.

The construction this summer has been a hardship on not just the Long Grove businesses, but for all those who need to commute through the area en route to jobs and schools. In addition, the local non-profit community groups have had to alter or cancel activities and fundraisers due to the disruption. The Arts & Music Council held an abbreviated concert series this summer due to work scheduled near Towner Green. The Rotary Club was unable to hold their annual Heritage Run this September and have replaced it with an Octoberfest fundraiser at Buffalo Creek Brewing this coming Saturday, October 6th. The Historical Society has unfortunately had to cancel their popular Ghost Walk this year due to safety concerns with walking groups of families in the construction zone amidst the Halloween darkness, detours, and pedestrian restricted areas. A much smaller (but still spooky) family event is being planned at the farmhouse on the evening of October 26th.

So what can we all do to help our village during the next couple of difficult months? Make it a point to patronize the downtown restaurants, shop for gifts in the local stores, pick up your morning latte at one of our downtown coffee shops instead of cruising the drive thru just because it is more convenient. Continue to contribute to our local non-profits, even if their signature fundraisers have been temporarily sidelined. By supporting each other our community can sustain through the construction disruption. In the meantime, pardon our dust, because one day soon this construction will all be in the past and the improvements will be well worth the wait!