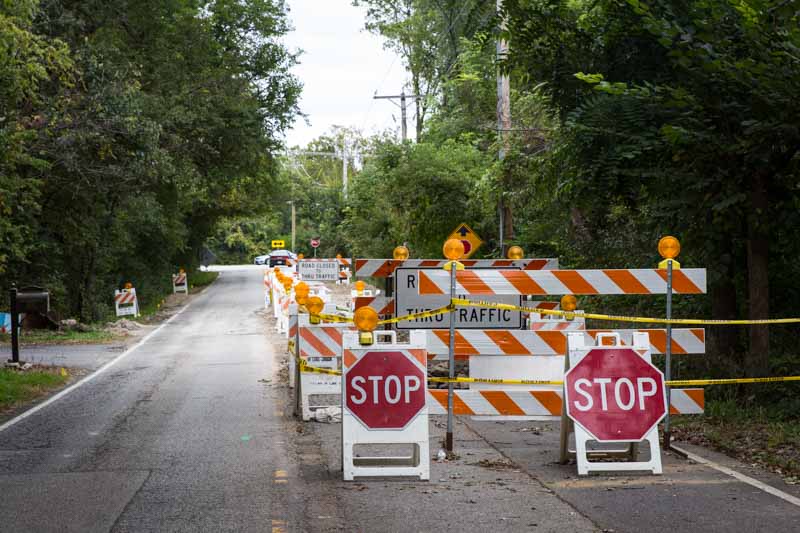 The recent warm Indian Summer days have been lovely, and it has been such a treat to be able to open the windows and enjoy the fresh autumn breezes that we all know are quickly going to turn cold. Unless of course, you live on Cuba Road. Residents in these million-dollar homes have had to close their windows as of late, in an effort to keep from invoking images of “the slums of a third-world country,” as was described to me by one resident. Slums, in Long Grove? Well, it only smells that way.

On the night of September 18th, a sanitary sewer owned and maintained by the Village of Lake Zurich collapsed on East Cuba Road in Long Grove, leaving a large hole in the pavement over the open sewer pipe. Originally thought to be a week or two of repairs, the problem has been found to be more extensive and a much larger section of pipe needs to be replaced. Final costs are still not in, but Lake Zurich has recently authorized an ordinance to issue up to $1.5 million in bonds to pay for the work, which could take as long as six weeks.

I was recently interviewed by Phil Rockrohr of the Pioneer Press about this road collapse and the resulting odors. Answering reporter’s questions is something that initially made me very nervous when I became Village President. With some experience behind me now, it has gotten easier not to be so tongue-tied. An excerpt from Phil’s article posted on October 12th describes how we are dealing with the stinking situation:

Lake Zurich officials have worked closely with Long Grove officials to address complaints of foul smells emanating from the hole created by the sewer collapse, according to Mayor Tom Poynton of Lake Zurich and Long Grove Village President Angie Underwood. Long Grove residents complained about the road closure caused by the hole and about the smell, Underwood said. “The residents that I’ve talked to and that I’m aware have called the Village seem to realize that it is a bigger situation than originally thought and that it’s going to take some time,” Underwood said. “We can all be patient about fixing the road, but when you’re dealing with a horrible smell day in and day out, that is a different level of inconvenience.” Several Long Grove residents complained to Village Hall staff, trustees, and Underwood about the smell, she said. Long Grove Village Manager David Lothspeich has conferred with Lake Zurich officials about the issue, and Underwood personally contacted Poynton, she said. “It was a very good conversation,” Underwood said of calling Poynton. “Long Grove and Lake Zurich have good working relationships between the two of us. We’re working together to get the best temporary situation in place for residents until it gets resolved.” In response to Underwood’s call, Lake Zurich officials spread deodorant blocks along the stretch of Cuba affected by the smell and placed a tarp over the hole, Poynton said. The tarp was sealed with sand bags, Underwood said. “I heard from one resident who said the situation was much better, “Underwood said. “There was some improvement. Hopefully, they will continue to monitor things, and everybody is keeping their fingers crossed they can get it fixed as quickly as possible and get back to normal.”

Yes, back to the sweet Long Grove smells of autumn bonfires and apple cider donuts. ASAP!

This past Saturday night I had the opportunity to attend a dinner, dance, and awards presentation sponsored by the Lake Zurich Area Chamber of Commerce.  I enjoyed the chance to meet and converse with area business and civic leaders.  In my past year and a half as Village President, I’m continually impressed with the collaborative way I see our elected officials and chamber volunteers work together for the mutual benefit of everyone in our corner of Lake County.  And the award winners this past weekend were perfect examples of this.  I noted that none of the recipients this year were from Long Grove.  For the next Evening of Excellence, I have it in mind to put forward some deserving nominees for “business of the year” and “citizen of the year” from our Village.  Could it be you?