On June 21st, Buffalo Creek Brewing in Long Grove marked their first anniversary by hosting a celebration in their 90 seat outdoor beer garden. Dubbed “Muttersholtz Fest,” it featured live entertainment with four bluegrass bands and whole-hog pork slow roasted on site. Pitmasters from Chicago Culinary Kitchen, BBQ’d Productions, and Steamboat BBQ added the perfect spices and sauces to complement the various beers offered, including one called “Muttersholtz.” Now a village in the Alsace-Lorraine region of France, Muttersholtz was the town that many of the early settlers in Long Grove originated from. Back in the 1840’s this region was part of Germany, and with Buffalo Creek specializing in many German style beers, what better way to tie the history and hops together.

Congratulations to Buffalo Creek on your first-year milestone, may you celebrate many, many more in our Village!

The Long Grove Lions Club was the beneficiary of funds raised at the Muttersholtz Fest event. Pictured are Lions members Jesse Visconik on the left, and John Kopecky on the right. 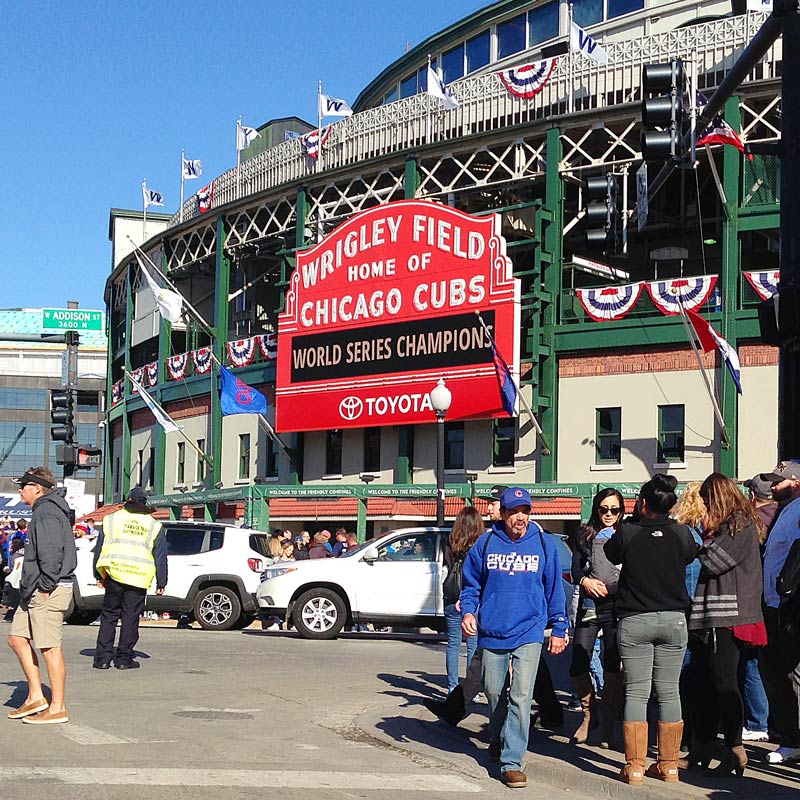 Coming home from our workout today in the city, Waze navigation unexpectedly took us past Wrigley Field, where I snapped this shot of the crowds still rejoicing in the recent Cubs win!

Life in Long Grove has been happily dominated by a historic event this week–the clinching of the World Series by the Chicago Cubs! The collective joy this victory has spread among residents has made the past several days especially memorable. And while I know that not everyone in the Village is a Cubs fan, I do know that a significant number of Long Grovians were part of the estimated 5 million cheering fans lining the streets of Chicago yesterday for the victory parade. I had several appointments to keep so I chose to stick around town, but I did enjoy the uncharacteristic lack of traffic on the local roads as a result!

Where were you when you watched the Cubs break the 108 year “curse”? We were at the Village Tavern, at least for most of the game. The Chatterbox was another local gathering spot for cheering and knuckle-biting. However, most residents that I’ve talked to were glued to TVs at home, celebrating with family and friends and even in a few cases, post-game fireworks. This past week has certainly been one for the record books and a shared memory for all of us in Chicagoland. Cheers to letting happiness and joy dominate our lives, for a few days at least!