Members of the community, Historical Society, and downtown Merchants Association gathered to hear a presentation on local history and welcome Harbor Chase to Long Grove.

Earlier this year Long Grove’s newest Senior living community, Harbor Chase of Long Grove, held their grand opening celebration. While I was unable to attend the big party, it was great to be invited for a personal tour and to speak at a luncheon this past week at the newly built assisted living and memory care facility. Enlisting the help of my husband Aaron (who writes for Long Grove Living magazine and loves to tell a story or two…) we gave an educational program on “The History and Architecture of Long Grove.” The Historical Society enjoyed partnering with our new neighbors at Harbor Chase to provide some community enrichment, and I hope this will be the first of many opportunities to work together.

Everyone who attended the free luncheon was also given a full tour of the beautifully decorated facility. During my years on the Village Board I dealt with the many plans, renderings, approvals and resolutions needed to get this development underway. The end result is very elegant, with attention to detail and amenities like live music, beautiful flower arrangements, and homemade macaroons, not just on special occasions but as part of the everyday lifestyle. There is even a resident puppy to bring smiles and lively energy!

Having this new business in downtown Long Grove is a key piece of the redevelopment efforts that are funding current infrastructure improvements, such as extending the water system. Just one more reason for us all to say, “Welcome, Harbor Chase!” 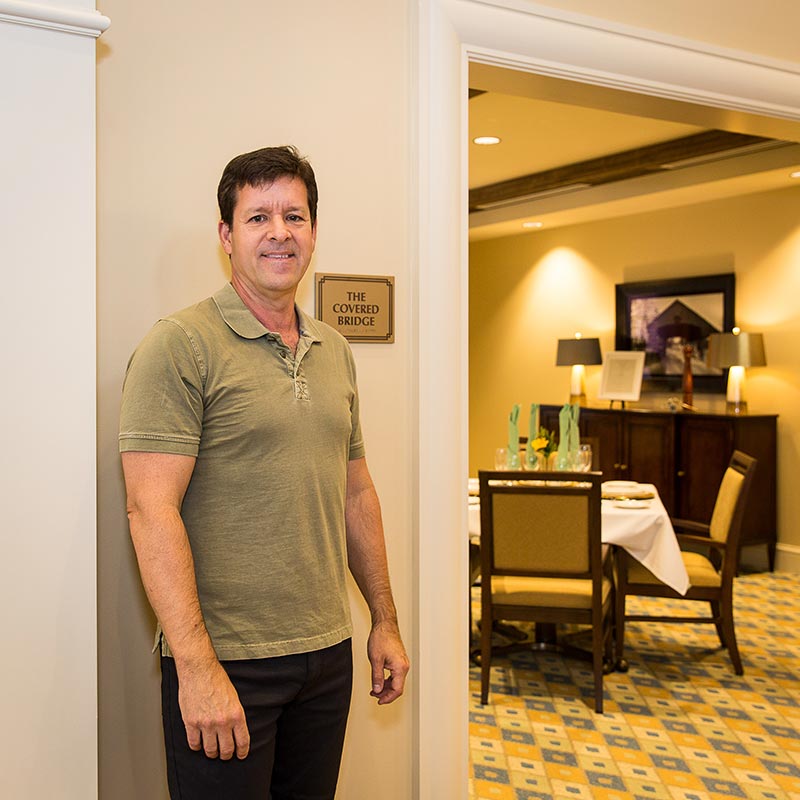 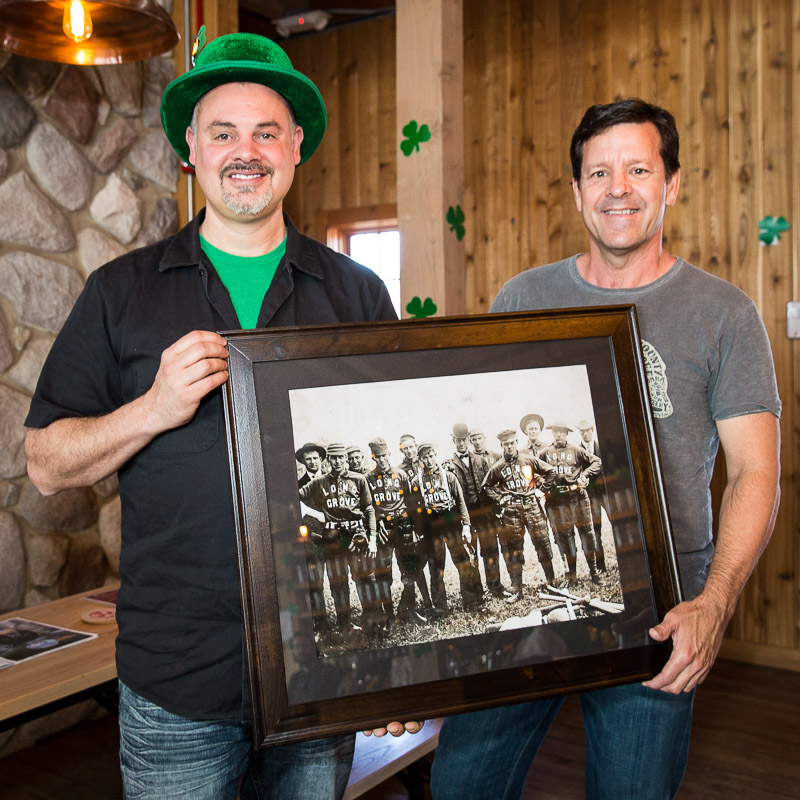 Long Grove is a great place to celebrate your Irish heritage on St. Patrick’s Day. Whether it’s a trip to Paddy’s on the Square for beautiful Ireland-inspired gifts, green beer at the Village Tavern, Corned Beef at the Chatterbox, or a mint chocolate chip cone at the new Covered Bridge Creamery, our Village is a festive spot to gather for the holiday. This year features another new option as Buffalo Creek Brewing hosts a day-long St. Patrick’s Day Party, featuring free Green Eggs and Hash, a special price on their “Burning Red” craft beer, and evening entertainment.

My husband Aaron and I stopped by the party this afternoon to congratulate Mike Marr, owner of Buffalo Creek Brewing and the newly installed President of the Historic Downtown Long Grove Business Association. In appreciation of his commitment of time and leadership to the downtown, (and being that he is a next-door neighbor to the farmhouse museum) the Historical Society presented Mike with a gift of a framed historical print of his choice. His selection, shown in the photo above, is of the Long Grove Crackerjacks baseball team, circa 1908. This was one of several “town ball” baseball teams that existed a century ago, with games played against other local teams such as Palatine and Lake Zurich. Mike likes to distinguish his craft beers with clever names, often a play on words or with a local significance. His newest creation is called “Muttersholtz,” the name originally given to Long Grove in the 1840’s by the early settlers who came here from the Alsace-Lorraine region in Germany. Maybe the picture will inspire a future craft beer that pairs well with baseball games and caramel corn?

Mike also mentioned that he is starting his canning operation in the downstairs of the Brewery starting this coming Tuesday. Compared to bottles, cans have many advantages for beer, two of which are keeping out unnecessary light and oxygen. So not only will your favorite beers be crafted right here in downtown Long Grove, but they will soon be canned locally as well.

However you choose to treat yourself, have a Happy St. Patrick’s Day! 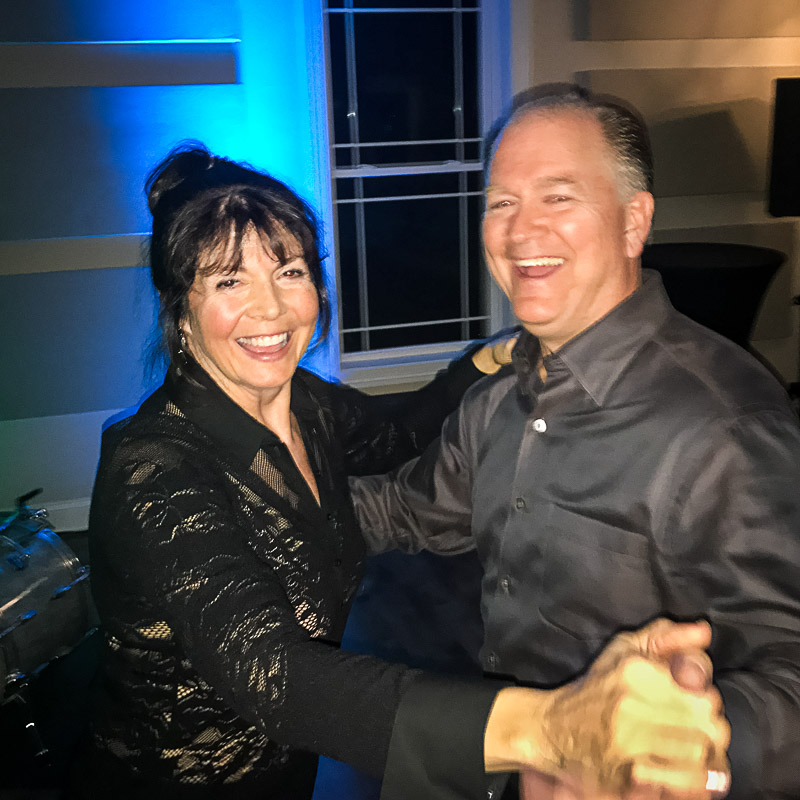 Lori and Mike Lyman took to the dance floor in support of the Long Grove Arts and Music Council at the March 10th Jazz & Dance Fundraiser.

The transition from winter to spring is a long and drawn-out process in our part of the Midwest. Each day we are gifted with a few more minutes of sunshine to enjoy, but our gardens and open spaces remain brown, drab, and lackluster. One week we are seduced to leave the heavy coats behind as the promise of warmer weather beckons, only to have another round of sub-freezing temps and snow flurries slap us with a reminder that, in fact, winter is still in charge. Setting our clocks ahead one hour this morning is another positive indication that a new season is on the horizon. The Long Grove Arts and Music Council provided a great opportunity last night to enliven yet one more cold and dreary winter night in the best possible way–with a Jazzy array of food, music, dancing, friends and philanthropy.

To raise funds and excitement for the 2018 Summer Concert Series, a benefit was held at the newly opened Fred Astaire Dance Studio in Long Grove. It was heartwarming to see the many donations local merchants and residents provided for the silent auction. A live jazz band was on hand to provide upbeat entertainment, as supporters and council volunteers mixed and mingled and generally enjoyed the congenial atmosphere. To me, it was another encouraging example of the revitalization efforts in our historic downtown these past several years paying off. Long Grove residents now have many options to come together and socialize locally, and in the case of last night, to also support a group that provides free summer concerts benefiting the broader community at large. And despite the current reluctance of winter to give way, it’s enough to put a little spring in my step! 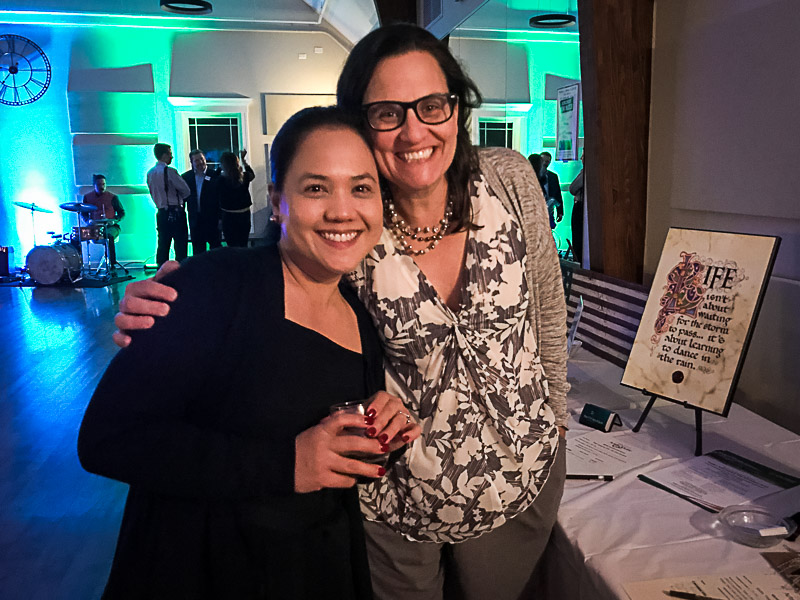 Ethel Robey-Berger, Arts and Music Council Artistic Director (on the left) and Mary Prekop of the Long Grove Confectionery check out the bidding competition on the silent auction items.