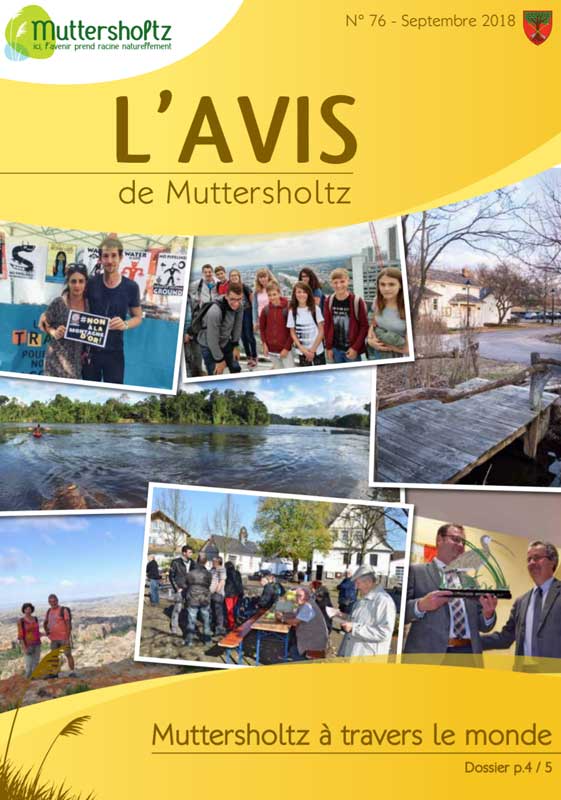 Notice a picture of our Long Grove Village Hall on the upper right of the cover of the Muttersholtz municipal newsletter.

Earlier this summer I was contacted by Martine Kilcher, the Deputy Mayor of the town of Muttersholtz, France. She was putting together a feature for their September, 2018 municipal newsletter on places around the world that have a special connection or “twinning” with their village. Long Grove was founded in part by descendants of settlers from Muttersholtz in the mid-1800’s, and went by that name for several years before officially becoming the Village of Long Grove. I was glad to be able to write a short piece about our history and current events, and provide a few pictures for our friends in Europe to see what our village in America, inspired by Muttersholtz, looks like today. From Martine I learned that Muttersholtz is also very ecology minded, even receiving a special designation for this. Our villages both share a historic downtown crossroads with vintage buildings, and have had local craft breweries open in the past few years. It was a delightful experience to connect with Martine and we have even kept up with each other’s organizations through Facebook. When our covered bridge was listed on the National Register our Historical Society received congratulations from France, and when it was damaged a few weeks later they shared in our sorrow. To learn more about Muttersholtz, France click on this link. 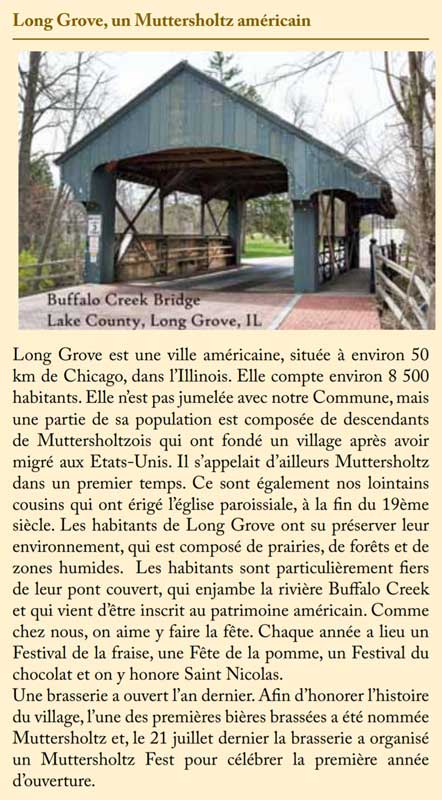 Here is the English translation for the article (above) that appears in the September, 2018 issue of the Muttersholtz municipal newsletter:

“Long Grove is an American city, located at about 50 km from Chicago, Illinois. It has about 8,500 inhabitants. It is not twinned with our commune, but part of its population is made up of descendants of Muttersholtzois who founded a village after having migrated to the United States. The name was Muttersholtz firstly. These are also our faraway cousins ​​who erected the parish church at the end of the 19th century. The people of Long Grove have been able to preserve their environment, which is composed of grasslands, forests and wet areas. The inhabitants are particularly proud of their covered bridge, which spans the Buffalo Creek and which has just been registered in the American Heritage. As with us, they like to party there. Each year a Strawberry Festival, an Apple Festival, a Festival of the chocolate and Saint Nicolas is honored. A brewery opened last year. To honor the story of the village, one of the first beers brewed was named Muttersholtz and, on July 21, the brewery organized a Muttersholtz Fest to celebrate the first year opening.”